A Pinder in Spain
Discover Spain with an expat.... 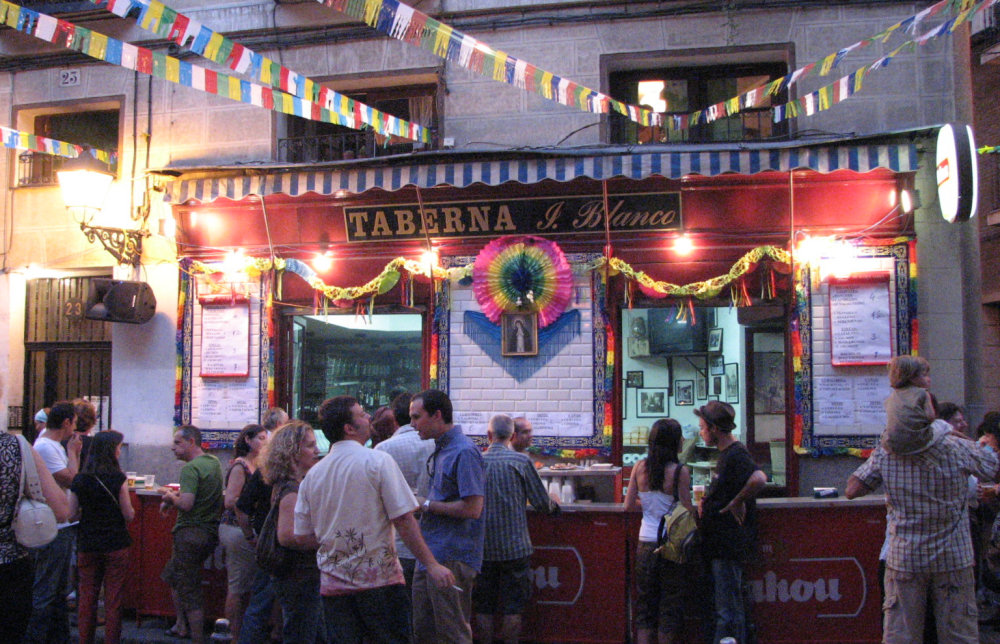 NOTE FOR 2020:  DUE TO CORONAVIRUS SITUATION, MOST OR ALL OUTDOOR FIESTAS ARE OFFICIALLY CANCELLED.

BUT……   MADRID IS MADRID AND I’M GUESSING THERE WILL BE AT LEAST SOME BALCONY SINGING,

SOME “PASEO” ACTION IN REGIONAL DRESS AND MAYBE SOME UNOFFICIAL DANCING IN THE STREETS.

THE NEIGHBORHOODS ON THE APPROPRIATE DATES.

JUST BE SURE TO MAINTAIN SOCIAL DISTANCE.

Feria del Libro Madrid / Book Fair Madrid Annual event in the Retiro park with lots of stands (bookstores and publishers). Usually some author participation, discounts on books purchased. More info (schedule, how to get there, partipating authors): http://www.ferialibromadrid.com/  Where and when: Retiro Park, central promenade (wide paved street east of the big lake, usually packed with bladers and bikers), usually first two weeks of June, may vary depending how dates fall.   DATES IN 2019:  May 31 – June 16

San Antonio de la Florida fiestas:  This is the first big outdoor fiesta after San Isidro – and since it is immediately after the “fortieth of May” when good weather is supposed to truly arrive it could be considered the first truly warm-weather fiesta. Like San Isidro, this has an outdoor carnival with crowds of people and lots to eat and drink, people strolling in traditional Madrid dress, inpromptu traditional dances in the street (chotis and pasodoble). In addition to all that: San Antonio finds boyfriends for single women – if you’re looking, ask where you can find the basket of pins to fulfill the tradition of patting your hand on the pins to discover how many suitors you’ll have: those in the know say it is better to have just one or maybe two that stick deep than lots that barely cling to your fingers. For procession: San Antonio church is in Glorieta de San Antonio in the evening of the Big Day (June 13). Alas, as usual it is almost impossible to find full info on this fun event, and double alas, in this time of budget cuts it is unclear how much of usual party will happen – there are usually fireworks and at least some nighttime music in the street but that may not happen in the newly-poor Madrid (don’t get me started).  Where:Paseo de la Florida, next to Casa Mingo of chicken fame and the no less famous San Antonio chapel(s). Metro Principe Pio.  When: Possible dates in 2019: June 08-13

Noche de San Juan / San Juan Eve: Midsummer’s night, just a few days from the solstice, the Christian date for a night of magic and pagan traditions. The shortest night of the year is usually celebrated with bonfires, with many other smaller rituals for luck or love. One tradition is to write a wish on a piece of paper and throw it into the fire. It’s also considered good luck to jump over the fire, different regions of Spain have different numbers of jumps (7 or 9 are frequent) and in one village in Soria people walk barefoot across the hot coals (San Pedro Manrique and yes, it can be done). In some cities of Spain this is a big deal, in Madrid the celebration is unofficial but tolerated, many small bonfires, usually some music and lots of people hanging out. Where and when: find the fun in the Parque de la Cornisa, behind the big church San Francisco el Grande on calle Bailen, June 23 after dusk

Photo España  Multiple venues, multiple artists from around the world. Usually there’s a general theme for the year, tying everything together, however loosely. Usually at least two months from early June to late July or into August. More info at:  http://www.phe.es/

Virgen del Carmen, July 16. Neighborhood fiestas in “Chamberi” area, around Glorieta Bilbao – Plaza Chamberi. For some relatively quiet fun, visit Plaza de Olavide and Plaza Chamberi in the evenings-nighttime (metro Bilbao). For a carnaval setup, with booths, food, live music, visit Pablo Iglesias street on east side of Parque Santander (metro Rios Rosas, Canal, Cuatro Caminos). That area will probably get going at 9.30-10.00 PM and go on until wee hours of the morning. On July 16, you can see the start of the procession at the church in Glorieta Pintor Sorolla (Metro Iglesia), usually starting at 9PM, and follow it around the neighborhood if you want. Usually includes fireworks in Parque Santander close these neighborhood fiestas.

San Pantaleon miracle, July 26-27. Not a big party, but a quiet, rather quirky local event at Encarnación convent on north side of Plaza del Oriente (Augustine nuns). San Pantaleon was a 4th century doctor in what is now Turkey, executed by Roman ruler for becoming Christian Every year a vial of dried blood of this saint turns liquid for 48 hours on the day before and day of his martyrdom. Science has some theories but no hard and fast explanation. People flock to the convent to see this event; in recent years it has been transmitted on TV and I think on live stream. Yes, you can visit this convent (17th c) but San Pantaleon time is probably not the best moment.

AUGUST :  BIGGEST AND BEST IN MADRID!!

Usual events for Madrid’s favorite summer fiestas. These are the usual events (which rarely change).  I will try to update if information appears in time, always a question, even close to the dates (my usual source: posters in windows of shops and cafeterias, which often appear before the official posters on bus stops and the like).

The first half of August has three “fiestas” that are quite close together: San Cayetano, San Lorenzo, and the Virgen de la Paloma (Virgin of the Dove.  All three days have an evening or nightime procession from the saint’s church on the saint’s day, and usually things going on for 3-4 days before the actual saint’s day.

These “fiestas” are a must-see, must-do, must-celebrate for any resident or visitor, major street parties for young and old. You’ll see people strolling in traditional Madrid dress, sometimes dancing traditional dances in the street – if you’re lucky, that will include the schotis, where the man rotates slowly while the full-skirted woman swirls around him (a saying about the man’s schotis technique: if he’s good, he can stand on a brick while doing his part).   Eating is an important part of the celebration (how not):  stands set up to sell churros, sandwiches, some simple tapas, pickled eggplant (messy to eat but yummy). On the drinks side you can get traditional barley water, beer, soft drinks, sangria and the truly typical drink of these fiestas: “limonada”, a kind of white sangria which can be tremendously potent or a pleasant buzz – best to start slow if you plan a long evening.

San Cayetano (Aug. 7)  Likely celebration dates in 2019: Aug 3-7   In the area around Plaza Cascorro, calle Ruda and the first part of Embajadores street.  San Cayetano church: calle Embajadores 15. Festivities usually include:  outdoor stage and music in Cascorro square for at least a few nights, street party outside the neighborhood association on calle Oso (next to the church), and some spillover to square a little down Meson de Paredes street. Procession on saint’s day, probably starting at 7.30 or 8pm.

San Lorenzo (Aug. 10) Likely celebration dates in 2019:  Aug 8-11. In the area  around Plaza Lavapies, including calle Argumosa, Valencia, and probably over to calle Embajadores to include the Corrala and San Fernando market. San Lorenzo church:  calle Doctor Piga 4 / calle Salitre. Festivities usually include:  This area is a little bigger so there’s more going on, often carnival type arrangement where you can win stuffed animals or the like, plus lots of outdoor eateries set up for the occasion. Check out San Fernando market, now doing fun cultural things so probably participating in the fiestas.  Procession on saint’s day, probably starting at 7.30 or 8pm.

As you can see, these dates are quite close, and if you know Madrid you know the neighborhoods are right next to each other, so all you have to do is follow the general flow of people and noise between Cascorro and Lavapies.

La Virgen de la Paloma (Aug 15) Likely celebration dates in 2019:  Aug  11-15. In the area around La Latina metro, especially calles Calatrava, Paloma, Aguila, Angel, and the streets around San Francisco el Grande chuch. La Paloma church: end of La Paloma street, about a block from calle Calatrava.  La Paloma is Madrid’s unofficial patron saint as well as patron of the center city, and as such, this is the biggest of the thre fiestas.  Festivities usually include:  lots of paseo action, locals strolling in typical dress (from babies to grannies); streets around San Francisco close for a carnival arrangement and lots of outdoor eatieries; spillover into Las Vistillas park (just off calle Bailen) with outdoor stage and dancing most nights, maybe also in Plaza de la Paja. Other parts of the celebrations: Masses every day from about 4 days before, one dedicated to Madrid’s firemen (she’s their patron saint), another to the Madrid-city regional groups. Red carnations accepted to decorate the float (check on date). Mass around mid-day on Aug 15, when the firemen take down the painting of the Virgin that will go on the float. Usually there are fireworks at midnight, frequently in the park next to San Francisco el Grande church, but have not seen confirmation of that event.    Procession on saint’s day, probably starting at 8pm.

Proud to say that this is my neighborhood, best in the city! But must say, the fiestas are pretty crazy and I try not to be here, since the entire city parties until 3AM for four nights in a row (one ok, but four?). Depending on what you want, you can have some fun, laid back strolling and eating (8-10pm more or less) then a transition time until it really heats up around midnight and goes strong until 2 or 3am. We are talking mega crowds, the cannot move kind of crowds, which some people love and others do not love. If that’s not your scene, arrive early, enjoy, and leave when it’s too crowded for you.

La Melonera   (mid-Sept): Technically this is not-quite summer but it’s included as the last of the summer fiestas. It’s smaller and more neighborhood than the big fiestas in May and August, so more local and low key than those mega-parties. Most of the fiesta action is in the Arganzuela park (along the river between calle Santa Maria de la Cabeza and calle Segovia). The small brick chapel along the river a little north of Segovia street is also part of the scene. In recent years this has also been celebrated at or near the Matadero cultural center. This fiesta usually includes a 10 kilometer run, fun at the Santa Maria de la Cabeza market, things for kids and adults. As for other good-weather fiestas in Madrid, watch for paseo action in traditional Madrid dress, typical dances in the street and sangria and limonada (white sangria).